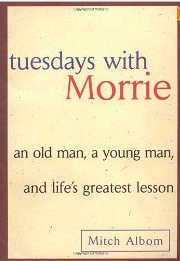 Excerpt: The last class of my old professor’s life took place once a week in his house, by a window in the study where he could watch a small hibiscus plant shed its pink leaves. The class met on Tuesdays. It began after breakfast. The subject was The Meaning of Life. It was taught from experience.

No grades were given, but there were oral exams each week. You were expected to respond to questions, and you were expected to pose questions of your own. You were also required to perform physical tasks now and then, such as lifting the professor’s head to a comfortable spot on the pillow or placing his glasses on the bridge of his nose. Kissing him good-bye earned you extra credit.

No books were required, yet many topics were covered, including love, work, community, family, aging, forgiveness and finally death. The last lecture was brief, only a few words.

A funeral was held in lieu of graduation.

MITCH ALBOM’s first full time newspaper job was as a feature writer and eventual sports columnist for The Fort Lauderdale News and Sun Sentinel in Florida. He moved to Detroit in 1985, where he became a nationally-acclaimed sports journalist at the Detroit Free Press and one of the best-known media figures in that city’s history, working in newspapers, radio and television. He currently hosts a daily talk show on WJR radio (airs Monday through Friday, 5-7 p.m. EST) and appears regularly on ESPN Sports Reporters and SportsCenter.