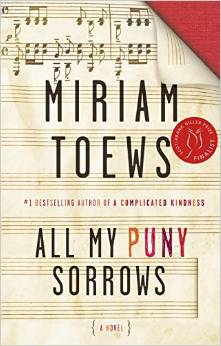 Miriam Toews has written this novel based on her own personal experiences with a sister and father who had battled depression and in the end, committed suicide. When Toews began writing All My Puny Sorrows in 2012 (the title is borrowed from a poem by Samuel Taylor Coleridge) she was unsure what form it would take. It was simply something she had to write, she says, a way to deal with the anger, and confusion, and sadness that threatened to become all-consuming. Many will read the novel as a memoir, and, while Toews says this is “definitely, absolutely” the most personal book she’s ever written, and much of the dialogue is based on conversations Toews had with her sister while Marj was in the hospital, it is still a work for fiction. (source)

The story is a passionate look at the connections that Elf and Yoli, sisters, form early in life and should sustain them through adulthood. But depression is an over powering monster and without timely help from the medical system, Elf sister is lost. The book brings up many questions about life, death, depression and suicide. It is a deep read.