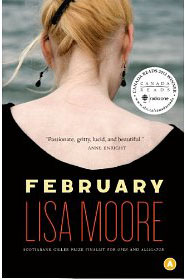 The Ocean Ranger went down and it looks like no survivors. The whole bloody thing went under.
The on the Seaforth Highlander saw the men in the water. One is always haunted by something, and that is what haunts Helen. The men on the Seaforth Highlander had been close enough to see some of the men in the waves. Close enough to talk. The men were shouting out before they had died. Calling out for help. Calling out to God or calling for mercy or confessing their sins. Or just mentioning they were cold. Or they were just screaming. Noises.
…And then all the shouting was just for company. Because who wants to watch a man being swallowed by a raging ocean without yelling out to him. They had shouted to the men in the water. They had tried to reach the men with grappling hooks. They say them and then they did not see them. It was as simple as that. (excerpt from the book)

The book is about this Canadian tragedy and shows us how Helen, wife of one of the workers on the rig, is affected by this.  …that’s the enigma of the present. The past has already infiltrated it: the past has set up camp, deployed soldiers with toothbrushes to scrub away all of the NOW, and the more present. There was no present.